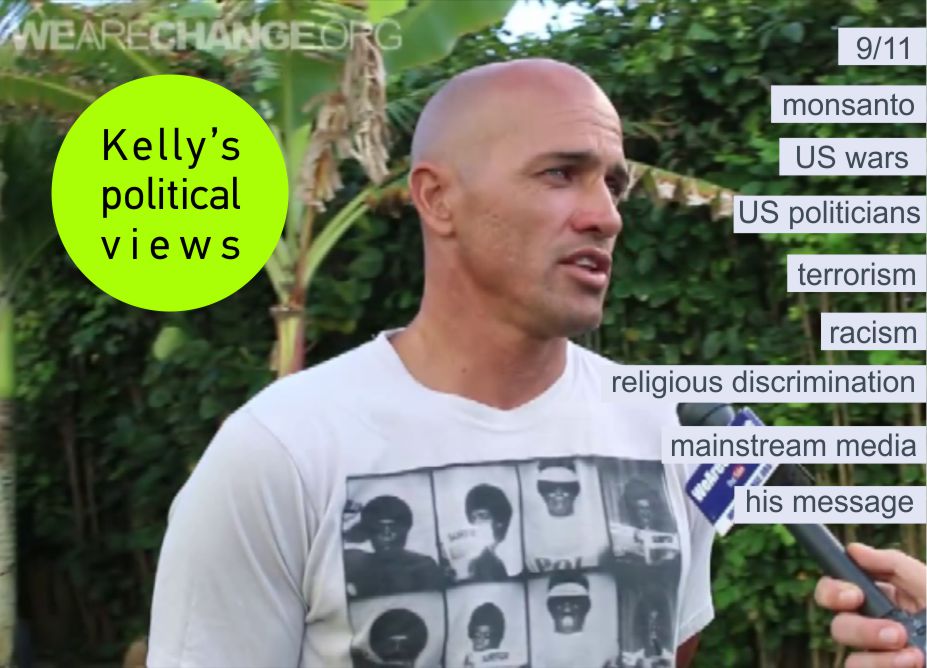 A recent alternative interview showed a side of Kelly Slater that, to our knowledge, was never before shown to the general public. Slater dishes out his thoughts, opinions and political views on a range of topics. From Monsanto activities in Hawaii to mainstream media, from 9/11 to US wars, from terrorism to religious discrimination. Whether we or you agree with Kelly or not, the influence that his thoughts can have on millions of fans is undeniable. Take a look into the political mind of the world´s most admired surfer whose surfing has been marveling the planet for decades.

We cut the interview into excerpts so you can go straight to the topic that interests you. (for full interview go to wearechange.org.) (You might not be able to access that site from Indonesia.)

“There’s a lot of farmland here owned or probably leased or rented by Monsanto and the like … It’s like ground zero here for testing all the new GMOs seeds and plants … Do you want this in your backyard? … Most people would say no. The problem is that you get a lot of people in the community who get jobs through that and they may be against it morally but … you have to pay rent and feed your kids … you’re starting to pit people against themselves.”

KELLY SLATER ON US POLITICIANS

“When people speak truth [Ron Paul, Ralph Nader] and throw things right in the face of what is popular and it’s the truth, I think those are people you can trust” … “Once upon a time I liked Cynthia Mckinney … she was the one person who was very vocal against the war: ‘9/11 was freaky situation, we don’t have all the facts behind that yet, we don’t know why we’re going to Afghanistan or Irak’.”

“I started getting away from mainstream media and started reading alternative media at some point … probably right after 9/11.”

“ … There’s a lot of things that are just fishy about the whole thing to me … so many questions. There’s never been an independent investigation … we’ve been in multiple wars since then, we’ve alienated or viliainized millions of people around the world since then … over things … we aren’t very aware what the reasoning [is] …”

KELLY SLATER ON US WARS

“There’s a lot of guys going there [to war] not knowing what they are fighting against. You see what Mohammed Ali went through when he said, ‘I’m not going to go fight these people. They didn’t do anything to me.’ … That’s kind of how I feel.”

“I love this country … at the same time we sometimes cause problems we don’t necessarily need to either handle or are not really ours … We need to always question our reasons behind why we do things and the intent behind it and the result we are going for. … Diplomacy has somehow vanished on the international political scale. People would rather villainize someone than to go and understand them and talk to them.”

“… what we call terrorism here and there. … Obviously there are people doing terrible, horrible, outrageous things around the world. A lot of it is perspective. … The whole thing is so confusing. … [you should] listen to your gut, and when things don’t make sense, there is something hidden. There’s more and more of that going on … and more and more covert as we evolve.”

KELLY SLATER ON SPREADING HIS MESSAGE

“I spend a lot of time reading and researching on my own. I haven’t been spreading much message. More sitting back and observing lately”

So is it safe to say screw Monsanto, investigate 9/11 and vote for nobody?, the reporter asks

THE SWELL OF THE CENTURY? THE MUZZASWELL Read More...