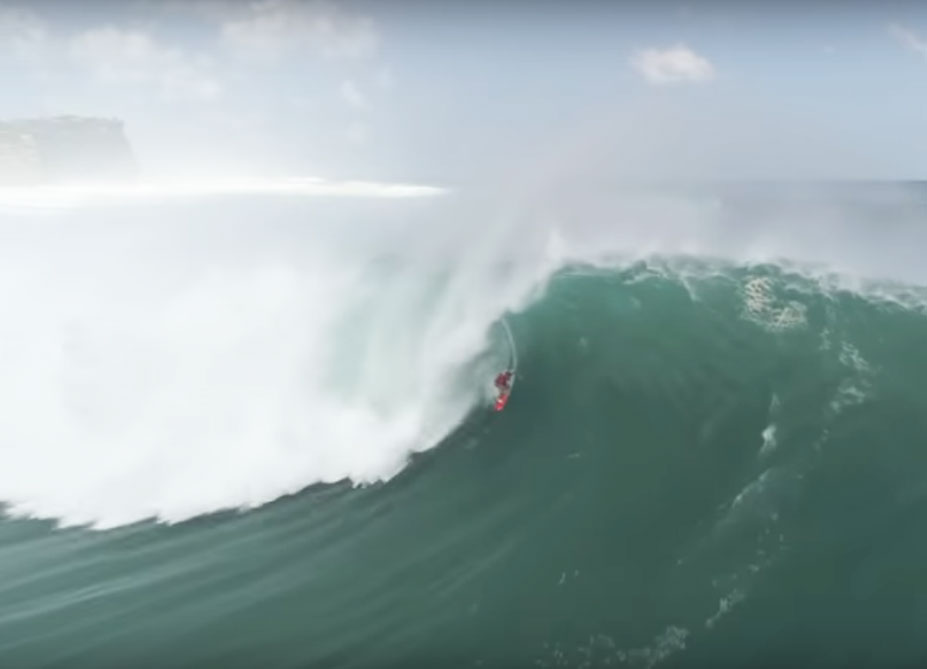 This dry season in Bali, the high season for surfing most would say, has been so far one of the best in recent years. Consistent medium to big back-to-back swells have hit all of Bali to the rejoicing of all local, resident and visiting surfers. The Bukit, the southern peninsula of Bali, where such famous spots like Padang Padang, Bingin, Impossibles and, the mother queen spot, Uluwatu, are located, has been on fire.

But this year of 2018 will stand out in Bali’s surfing history for what many of you already know: perfectly-peeling enormous masses of water that were only (we think) surf-able if you were towed in.

Indeed, this past July 2018 started with a good size swell on the first week with all spots working.

Everybody having a blast. Closely following the forecasts, surfers were calling for big riders to get their guns ready.

After a two-day hiatus, when waves slumped giving people time to rest and a chance to get ready for the big swell lining up, a big and surf-able swell hit on the third week of July. As always when big swells are forecasted, many locals and residents crossed the straits to Lombok or Java to surf Desert Point or G-land where big swells are more likely to play out better, with more barrel time assured. The Bukit, of course, has Padang Padang, the beautiful but elusive princess that on good-size swells will show its beauty and fierceness. But she is short and elusive, and if you are not a local, no matter if you are a resident or a good surfer; chances are Padang will be even more elusive to you. Bingin doesn’t barrel on big swells. Impossibles needs the right tide and may be barreling but not all day. Its barrel, although big and intense, it’s not that long. Ballsy surfers pray for the best tide, swell direction and current and wind conditions to catch the monster barrel of them all at Outsider Corner’s, or to catch, God willing, the longest ride with occasional big, intense barrels from The Bombie all the way through Racetracks. Both waves at the queen spot Uluwatu. Ballsy surfers.

It’s not a wave for the average surfer looking for tube time. So surfers looking for barrel time usually split.

But another even bigger swell was forecasted to start hitting around the 24th. That is, just a few days later with no significant slowdown.

Now guys were seriously calling for big wave riders to have their guns ready.

And the swell came and hit.

At Ulu’s it was nothing like we have seen before in 10 years of being based in Bali. Most locals and longer-time residents also agree.

15-20-foot waves perfectly peeling off along the Uluwatu reef for hundreds of meters. And that’s not an overstatement. In any case, an understatement as some people claim 30-foot rogue wave sets rolled in.

If you were supported by a pair of strong legs and those legs were on a board and your board on one of those waves you had a huge, long face in front of you to carve as a blasting lip at furious speed would be playing tag with you and yet never catching you.

You could even try and go get barreled at the big, growling barrel forming on the upper line of the wave’s eye.

But of course, first, you had to get on the wave.

And for that, you needed to be towed-in. Have a look.

Brazilian Eloy Lorenzo and his partner Russian big-wave surfer Andrey Ovchinnikov were the only jet-ski tow-in surfing team out that day. That wave and that session were in the morning.

On the 24th we had paddled out at 10-feet Outside Corner’s with the occasional 15 footer.

But on the 25th in the afternoon we hadn’t seen the conditions yet so we went to the Uluwatu cliff with our ready guns to catch some more of that big fun-big.

We went down a few steps to the warungs to have a better view of the ocean. The cliff at Uluwatu stands at about 50 meters above the sea providing the best vantage view of the waves and the ocean towards the horizon. It’s like an amphitheater from where you can see how the swell is coming and hitting the coast and how it then translates into waves once it hits the reef.

It’s always wise to gauge the waves and the ocean from outside so as to know where to sit. So we watched the conditions for 5 minutes. Then we sat on the chairs and ordered beers. We were wise.

There were no jet-ski tow-in teams.

Two or three guys were out on paddle boards. They were ballsy but not wise. You have to hand it to them, though. If you don’t paddle out, you don’t know.

They paddled out and so they knew. The current pulling away

“was like a river making it almost impossible to get into position”,

later would comment one of the paddle-in surfers out that afternoon, a father, surfer and blogger of an adventuring surfing family that had witnessed the morning’s session from Blue Point’s restaurant. He had also recorded it. Have a look at the same ride from a different angle.

Indeed, the rip looked impossible to battle so you had to consistently paddle as the current pushed you further away while taking masses of white water on the head until it finally let you go at the far-off channel.

Then, of course you had to paddle as open as you deemed safe towards the line-up at outside Outside Corner’s or even further towards outside The Bombie. Once at the line-up, you would have no chance. You would know it. You would be out and you would know it. At that size, a seemingly insignificant variation of degree in the angle at which the sets would hit would mean several meters off of what you thought was the line-up. If you were caught, you were done for. You would get the whole set in the head, your board or leash would snap, but if neither did, you would be dragged so far off that any attempt to make it back to what looked like any of the line-ups would be physically extenuating or mentally… unwise.

So the guys were sitting off and out from where the waves were breaking. Were the waves possible to paddle into? Possibly yes. But what if you didn’t catch it? The above described would follow. Your session was over. They paddled out, they saw and they knew.

The waves that ruled the day were 15-to-20-to-25-foot tall masses of water coming at furious speed in less-than-ten-minute-apart sets of 6 to 10 waves breaking at outside The Bombie and outside Outside Corner’s but (on each spot) not at exactly the same place but rather within a range of 10 to 20 meters and then perfectly (perfectly) peeling off over the ripping current on top of the Uluwatu reef for hundreds of meters. It was not a day for paddle surfing.

So to answer the question that titles these two-part series; Is Jet-Ski Tow-In Surfing Desirable in Bali?

Without a shred of a doubt.

And we believe this swell and its date will place Uluwatu on the big-wave tow-in teams’ radars.

We had never before witnessed or watched footage of anything like that, ever.

Usually, serious, meaningful tow-in is used for surfing huge waves only, or practically-only-surf-able by tow-in. Waves that are either a huge drop with one or two high shoulders were to carve a re-entry to a subsequent drop like Jaws at Peahi, Maui, the pioneer wave for tow-in, or monster dredging barrels like big Teahupoo, Tahiti, or suicidal close-out slabs like The Right, Australia.

Uluwatu, on the 25th of July 2018, proved to be none of that and yet to be a wave that at that size and conditions should be towed-in (we think). And, we think… no, we are sure, big-wave tow-in surfers would love.

Why? It’s not a huge drop like Jaws or Nazaré. It’s not a jacking-up, folding-itself square, back-breaking lip exploding on defacing shallow reef barrel like Teahupoo. And it’s not a suicidal wave.

In fact, Uluwatu, as we witnessed it, by big wave tow-in standards, it’s not that big. And it’s not that dangerous. It’s not any of that. But it is what the others aren’t. It is a big, huge, fast-combing super long wall that allows for big and powerful carving maneuvers combined with fast-exiting multiple barrels. It’s the super long 6-foot dream wave that combines powerful carving, tube-riding and even aerials but on a much, much bigger scale.

With an amphitheater with cold beer and all to sit and watch the show.

Of course, those swell conditions are rare. But we are certain that some people took note of the parameters and variables that created this magic day and that they will be ready for the next time something similar is forecasted.

Because it will happen again.

Uluwatu has the beer and can readily wait.

Will it be beer or straps?

Part II and final of “Is Jet-Ski Tow-In Surfing Desirable in Bali?” will be out soon. Subscribe to our newsletter or connect with us through our social media channels to not miss it.

THE SWELL OF THE CENTURY? THE MUZZASWELL Read More...